Below is a list of common terminology that you will hear from your industry professional and Mont.

Percentage of moisture absorbed by weight.

A metal fastener used for securing dimension stone to a structure.

A finish that replicates rusticated or distressed textures.

The area located between the countertop and lower cabinet. Typically around 18¨ in height.

A sloped surface contiguous with a vertical or horizontal surface.

A layout in pairs of all stone elements to confirm that the design matches.

Obtained by brushing a stone with a coarse rotary-type wire brush.

Convex rounding of a stone member, such as countertop edges or stair treads.

An external corner formed by two stone panels with one head.

The first step in the finishing process of a stone tile.

A process of mechanically chipping the tile edge, thus giving the stone a rustic, aged appearance.

A flat stone used as a cap on freestanding walls.

The process of cutting the initial block of stone parallel to the natural bedding plane. The effect is a mottled or cloudlike appearance.

A natural building stone that has been cut and finished to specifications.

When referring to a slab material, the square edge profile normally has softened edges as opposed to sharp square edges for added safety.

A manmade product composed of a blend of natural minerals and manmade agents (such as polyester, glass, epoxy, and other such ingredients). Gives the appearance of a stonelike surface, but it does not possess the characteristics of a natural stone.

A flexible, usually thermalsetting resin made by the polymerization of an epoxide; used as an adhesive.

Used in reference to dimension stone, it means manufactured and ready for installation.

The exposed surface of stone on a structure.

A trade expression used to indicate the filling of natural voids in stone units with cements or synthetic resins and similar materials.

Final surface applied to the face of dimension stone during fabrication.

A hairline opening in the face of stone demonstrating stones natural characteristics; a lineal or non-directional void in the face and crystalline structure of stone that typically is very thin and irregular.

A mechanical device, also known as a “frame saw,” used to cut stone blocks to slabs of predetermined thickness.

A grinding process to make all pieces of material to be used together the same thickness.

A satin smooth surface finish with little or no gloss, recommended for commercial floors.

Any of the various volcanic rocks, solidified after the molten state, such as granite.

Applying liquid chemicals containing stain inhibitors or sealers that penetrates below the surface of the stone.

The gluing of two pieces of stone together to produce an edge that can be shaped to create an aesthetic appearance for countertops.

A surface finish which gives the stone a lightly textured semi-gloss finish.

A sedimentary rock composed primarily of calcite or dolomite. The varieties of limestone used as dimension stone are usually well consolidated and exhibit a minimum of graining or bedding direction.

A metamorphic crystalline rock composed predominantly of crystalline grains of calcite, dolomite, or serpentine, and capable of taking a polish.

Rock altered in appearance, density, crystalline structure, and in some cases, mineral composition, by high temperature or intense pressure, or both. Includes slate derived from shale, quartz-based stone from quartzitic sand, and true marble from limestone.

A product of nature. A stone such as granite, marble, limestone, slate, travertine, or sandstone that is formed by nature, and is not artificial or manmade.

A stone molding with a reverse curved edge: concave above, convex below.

The portion of a stone countertop that cantilevers or extends beyond the cabinet front. The typical overhang for kitchen countertops is 1It is normally safe to allow 3cm thick granite countertops to overhang up to 10” without additional support.

A glossy surface finish that brings out the full color and character of the stone.

A chemical paste used to draw a stain from the pores of a stone.

The location of an operation where a deposit of stone is extracted from the earth through an open pit or underground mine.

A silicon dioxide mineral that occurs in colorless and transparent or colored hexagonal crystals or in crystalline masses. One of the hardest minerals that compose stones such as sandstone, granite, and quartzite.

A rounding of the corners of a stone piece. A radius can be applied to a countertop edge profile or to moderate an exposed countertop outside corner.

A trimmed slab with a width and length that is not preset, but variable within certain limits.

Stone slabs which have had resin applied during the finishing process. The resin fills any voids in the face of the stone giving the surface a smoother, nearly flawless finish.

A loose term applying to foliated metamorphic (recrystallized) rock characterized by thin foliae that are composed predominately of minerals of thin platy or prismatic habits and whose long dimensions are oriented in approximately parallel positions along the planes of foliation.

1. An elastic adhesive compound used to seal stone veneer joints. 2. A chemical treatment applied to the face of stone used as a protectant to retard staining.

A piece of plastic or other noncorrosive, nonstaining material used to hold joints to size and keep the faces of adjacent stones level.

A lengthwise-cut piece sawn or split from a quarry block prior to fabrication.

A flooring surface of marble or granite chips in a cementitious or resinous matrix, which is ground and finished after setting.

The ability of many lighter-colored marbles (onyx) to transmit light.

A variety of limestone that is a precipitate from hot springs. Some varieties of travertine take a polish and are known commercially as marble.

A layer, seam, or narrow irregular body of mineral material different from the surrounding formation.

A cut into quarried stone perpendicular to the natural bedding plane. 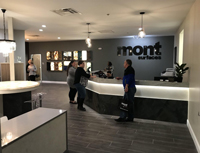 Do you have questions on our products or need to contact a Mont Design Center in your area? Let us help.